Arrive in Delhi (International flight details awaited). On exiting the aerobridge you will be met and assisted through the airport’s immigration and baggage reclaim and then in the arrival hall you will meet our representative who will assist you to your vehicle and transfer to the hotel. Standard check-in time at hotel is 1400 hrs.

The capital of India, Delhi is home to 16 million people, making it the third largest city in India.  The strategic location of the city made it an attractive location for invading armies, and it served as the capital for many great empires that ruled India.  Many of these Empires built significant monuments, and whilst the Mughal and the British are the most visible, while driving through the city you will see ruins from previous capitals, the earliest dating back to the 12th century.

This morning after breakfast you will be taken for the sightseeing tour of Delhi.

Pulsing with energy and colour, Old Delhi is laced by a maze of narrow lanes, which twist and turn between the tall, leaning buildings. You will witness the hustle and bustle of thronged bazaars where you will experience the full sights, sounds and aromas indicative of the Indian sub-continent. In Old Delhi you will visit the famous Red Fort surrounded by shops and bazaars, the Jama Masjid with its tapering minarets and wonderful marble domes and Chandni Chowk. In Old Delhi you will also have an opportunity to experience a rickshaw ride.

Also will visit the Gurudwara Bangla Sahib, the temple of the Sikhs.  Their turbans and beards make the men easily identifiable with the sect. Sikhism developed as an antithesis to the caste ridden and ritualistic forms of Hinduism and developed as a simple religion whose foundation was “sewa” – socially responsibility irrespective of a person’s social standing.  Thus every Sikh Temple has the famous community kitchen, where it is considered a privilege to assist cooking the food and serving a simple meal to pilgrims, the economically challenged or a visitor.

You will also drive through the government buildings area. You will glimpse the magnificent Parliament Building, built in a circular shape supported by 144 pillars. The Rashtrapati Bhawan (the official residence of the President of India) is spread over 330 acres and was designed by Sir Edwin Lutyens. Also drive past the India Gate, an arch which is a war memorial and honours the 90,000 soldiers of the British-Indian army, who lost their lives fighting for the British during WW1. 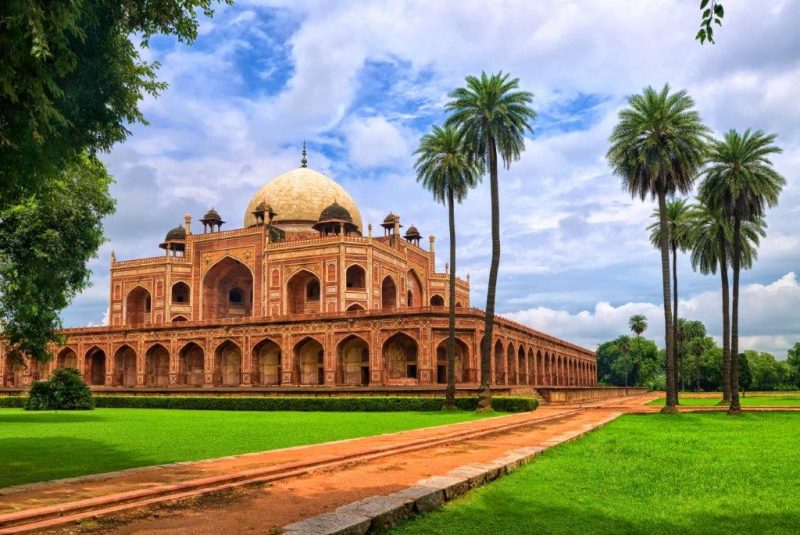 Visit Humanyun’s Tomb was built in the 16th century and is architecturally considered the forerunner of the Taj Mahal. Commissioned by the widow of Humayun, the second Mughal emperor, it was subsequently used as a burial place for members of the royal family.  Today it is one of the most beautiful sites of North India.

This morning after breakfast you will be escorted to airport to board your flight to Jodhpur:

Arrive and you will be met and transferred to the hotel.

Rao Jodha, chief of the Rathores, a Rajput clan, founded Jodhpur in 1459. Until recent times, Jodhpur was known as the ancient kingdom of Marwar, the largest kingdom in Rajputana. Standing at the edge of the Thar Desert, Jodhpur is the largest city in Rajasthan after Jaipur.

Evening will be at leisure.

This morning you will be taken for the sightseeing tour of Jodhpur.

Of all the many forts in Rajasthan, very few compare to majesty of the Meherangarh Fort.  The fort is divided into three sections – the public areas, the Maharajas palaces, and the zenana, or queens’ palaces.  The zenana is decorated with exquisite sandstone filigree work. Within the fort is the museum which among its varied exhibits has an excellent collection of royal palanquins and the howdah section which has perhaps the finest collection of old ornate elephant howdahs in the world. 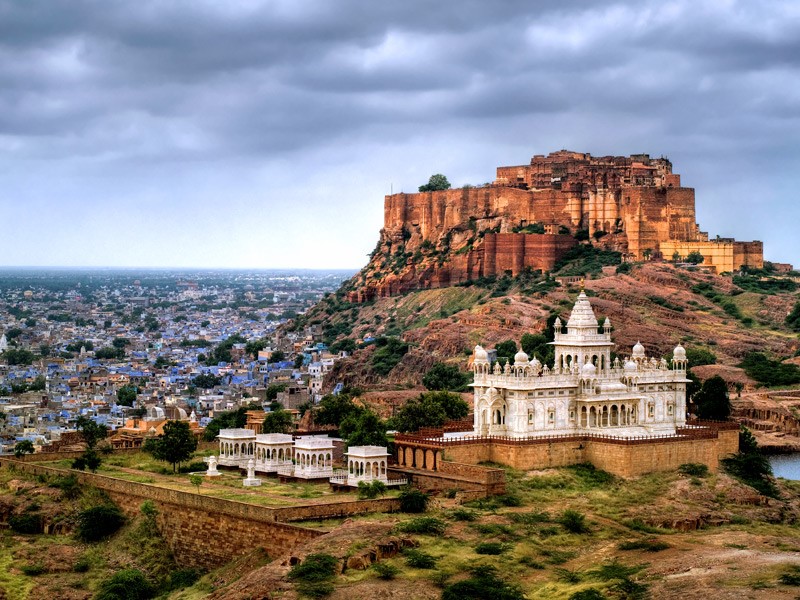 In the evening, walk through the Old City Bazaar’s, noted for its craft stores that manufacture and sell silver jewellery, lacquer ware, tie dyed fabrics, puppets and camel hide leather products. Jodhpur is also known for its antique warehouses that sell a varied an interesting collection of bric-a-brac. You will also make your way to the spice market and get acquainted with the variety of Indian spices.

This morning after breakfast you will be driven to Jawai (approx. 3 hours), Upon arrival in Jawai Bandh you will check in at your camp, Jawai Camp Set in a dramatic location amongst craggy boulders, lovely water bodies and green fields, you will stay in African style tents.

You spend the day exploring the area, the browns and greens of the surrounding country side broken by the vibrant colors of the women’s clothes and the men’s turbans.

This evening, you will take your first safari, searching for leopards. 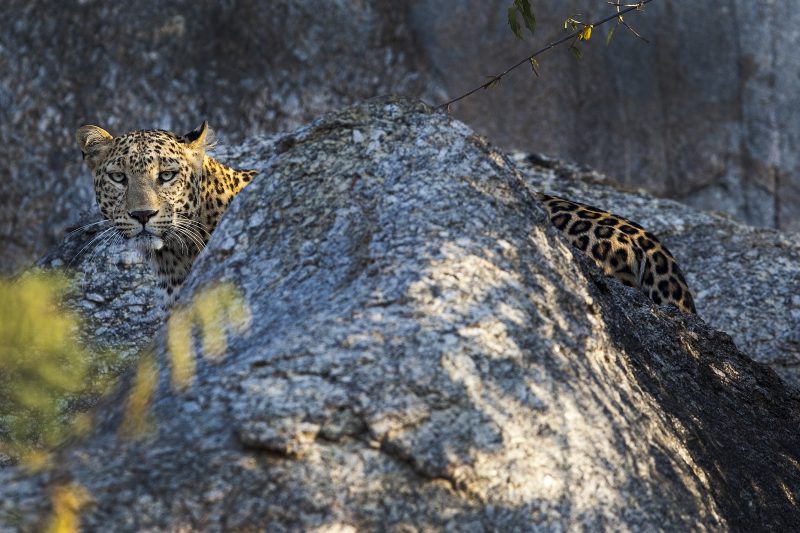 Enjoy your last safari. Later after breakfast you will be driven to Shahpura Bagh (approx 5.5 hours), upon arrival check-in at hotel.

This property, once the summer residence of the Rajadhiraj of Shahpura has been beautifully restored and furnished in a wonderful mix of antique and modern. It may not be the grandest of the palaces, but it is certainly one of the most exclusive; you will be treated as beloved by both the hosts Sat and Maya Singh and staff who have been serving them for generations. But the real stars are the Rajadhiraj and his two sisters, all in residence who regale you with old tales of tiger hunts. Shahpura Bagh offers a sylvan setting, comfortable rooms with old world charm and great food.

Spend the day at leisure or enjoy the in-house activities. 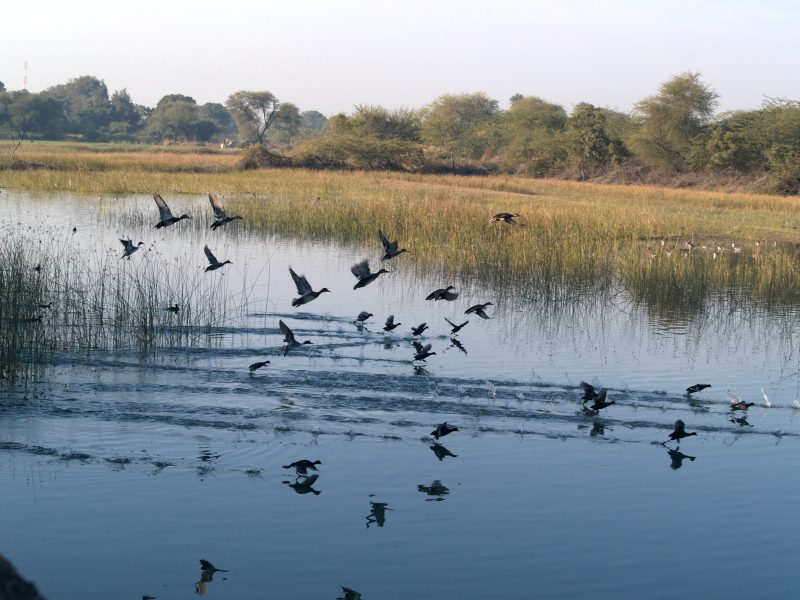 This morning after breakfast you will be driven to Ranthambhore (approx 5.5 hours) Arrive and check-in at the hotel.

Once the hunting ground for the Maharaja of Jaipur, who led huge hunting parties into these forests,  today the park is a protected forest area and is under the aegis of Project Tiger, a venture set up to protect the tiger from extinction.  The park with its Sal forest, grasslands and water bodies is home. You will visit the park early in morning and in the evenings.  In between game drives you will go birding outside the park – some of the best birding sites are the Fort and the smaller water bodies, ideal for sightings of the painted sand grouse, chestnut bellied sand grouse, larks, Pipits and painted spurfowl.

Early this morning you will take game drive in the National Park; midday is free for walks or relax and in the afternoon you can enjoy your second game drive of the day…. 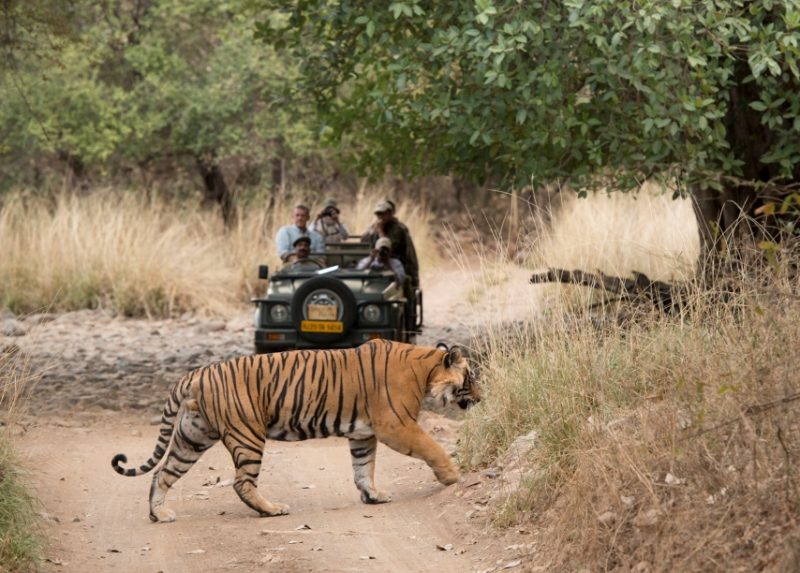 Early this morning you will take your last game drive in the National Park. After safari and breakfast, you will be driven to Ajabgarh (approximately 4 hrs drive). Upon arrival you will check-in at hotel.

The countryside is littered with small rural hamlets with their narrow streets, simple dwellings, markets, and subsistence agriculture and at almost every turn in the road lies a ruin or relic from lost empires.  Scenically the area is magnificent with the craggy hills of the Aravalli range dropping down into lush green valleys.  The opportunities for photography are exceptional and the insight into the lifestyles and cultures of the Indian countryside unparalleled. Life in Ajabgarh follows its own rhythm, one which has not changed through the years.

Spend the time at leisure or enjoy the hotel activities.

This evening you go on a drive through the surrounding villages and farmlands.  This hour is known as “Gaudhuli” or the cow dust hour, a name which is result of the dust raised by cattle returning home at this hour.  It is a magical time to be out in the countryside.  Sunrise and Sunset are considered auspicious times in India, and as you drive through the village stopping perhaps for a cup of tea, you will see small rituals performed to welcome in the night and to ward off the dark spirits.  This is a rare opportunity to see life in rural India.

After a leisurely breakfast this morning, you will be driven to Delhi (approx. 5 hrs drive). Upon arrival you will check-in at airport hotel.

Standard time of check-out is 1000 hours

‑ Accommodation for 13 nights at the hotels as mentioned above

‑ Breakfast at the hotel in Delhi, Jodhpur & Ajabgarh

‑ All meals in Jawai, Shahpura & Ranthambore

‑ Services of an English speaking naturalist for safaris in Jawai & Ranthambore

‑ Entrances to the monuments as per the itinerary

– Special activities as mentioned in the itinerary

‑ Porters’ fee at the airports only

– Any other meals than those mentioned in the itinerary.

– Car at disposal or any sightseeing on leisure days – unless specified above.

– Early check-in or a late check-out room (s) at any hotel (s) – unless specified above.

-Liability for change in itinerary due to reasons beyond our control like change in flight and train schedule cancellation of flights/trains, political disturbances, natural phenomenon, etc.

– Any other item not specifically mentioned above as ’INCLUDED’.

– Any other Govt. tax increase.

This website uses cookies to improve your experience while you navigate through the website. Out of these, the cookies that are categorized as necessary are stored on your browser as they are essential for the working of basic functionalities of the website. We also use third-party cookies that help us analyze and understand how you use this website. These cookies will be stored in your browser only with your consent. You also have the option to opt-out of these cookies. But opting out of some of these cookies may affect your browsing experience.
Necessary Alltid aktiverad
Necessary cookies are absolutely essential for the website to function properly. This category only includes cookies that ensures basic functionalities and security features of the website. These cookies do not store any personal information.
Non-necessary
Any cookies that may not be particularly necessary for the website to function and is used specifically to collect user personal data via analytics, ads, other embedded contents are termed as non-necessary cookies. It is mandatory to procure user consent prior to running these cookies on your website.
SPARA OCH ACCEPTERA